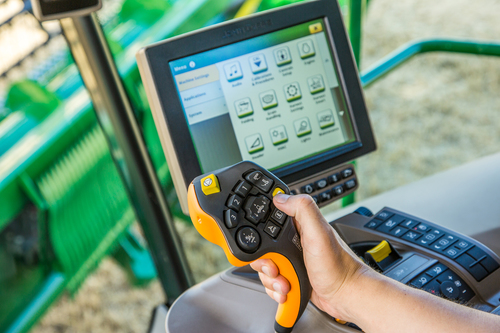 The most advanced grain harvesting technology from front to back is featured in the combines and headers John Deere is introducing for 2018. Four new S700 Series rotary combine models – the S770, S780, S785 and S790 for the UK and Irish markets – offer producers significant improvements in ‘smart’ technology, operator comfort and data management.

Building on the proven field performance of the S600 Series combines with variable stream rotor introduced in 2012, the S700 Series models incorporate the latest in automated harvesting technology. Many of the changes make it easier for the operator by allowing the combine to carry out the necessary adjustments automatically, on the go.

“These new S700 Series combines are the result of enhancements to our previous models that optimise and automate harvesting operations for both coarse and small grains,” says John Deere’s European combines product manager Carsten Heftrig. “We've increased the overall intelligence of these combines by automating more adjustments and calibration tasks. We’ve also improved the lifetime durability and productivity of our front-end equipment to create a high performance harvesting solution unlike any other on the market today.”

To make it easier for operators to maximise the performance of these new combines, John Deere has introduced the next generation of automation, Integrated Combine Adjustment (ICA2). After optimising machine settings such as throughput, grain quality and losses, and cleanliness of the sample using ICA, the ICA2 system – which is part of the range’s new Combine Advisor package – changes both the threshing and cleaning system settings automatically to maintain the pre-selected output at a consistent level, whatever the harvesting conditions.

Also within the Combine Advisor package, two ActiveVision cameras give the operator a view into the tailings and clean grain elevators via the cab display. The system constantly analyses this information from the cameras along with the loss sensors to maintain optimal threshing, separating and cleaning performance based on the operator set targets.

According to a study conducted by the University of Göttingen in Germany, ICA can improve utilisation of the combine’s built-in capacity by an average of 20 per cent.

Winner of a DLG Silver Medal award at Agritechnica 2015, the new Active Yield option transforms the accuracy of yield mapping by automatically calibrating the combine’s standard mass flow sensor. This saves time and improves harvesting performance by eliminating the need for time-consuming manual calibrations and double-weighing of trailers, and ensures that the most accurate data is collected for more effective precision farming applications.

Three weigh cells inside the grain tank automatically measure the change in weight as the tank fills. The system compares this measurement with those of the mass flow and moisture sensors to calibrate the yield data constantly. It is also designed to compensate for shifting grain when harvesting on slopes or if the combine stops.

The yield data is displayed on the GreenStar 4600 display and can be wirelessly transferred to the Operations Centre in MyJohnDeere.com. From here it can be downloaded into the farm management system and used to create a prescription map for the next job to be carried out in the field.

The biggest physical difference customers will see in the new S700 Series combines, compared to previous models, is in the cab. This starts with the new CommandPRO joystick, which features up to seven individually programmable shortcut buttons for customising the most useful functions. The common design shared with the new 6230R and 6250R tractors will be welcomed by existing John Deere users, while newcomers should appreciate the joystick’s intuitive colour coding and backlighting of the controls.

The cab’s new GSD 4600 display is also very easy to use. “This works just like a mobile touchscreen device, with a unique swipe functionality to scroll from screen to screen,” says John Deere Limited’s combines product sales specialist Charles Grey. “The layout can also be customised according to the needs of the operator, the prevailing harvest conditions or the job to be done.”

Since its launch in 2012, the Zweibrücken built S-Series has been through several hardware updates, including a new four-strand feederhouse, eight-wing beater, active concave isolation, a new cleaning shoe, increased engine power and 40kph transport speed on both wheels and tracks. These were all designed to enhance combine performance and were the result of constant improvements made by John Deere’s European Crop Harvesting Development Centre in Zweibrücken, Germany. For this new series the focus has been on automation.

“Features get used when they are easy to operate, and that’s what we have achieved with this new combine range,” says Chris Wigger, John Deere’s vice-president, ag and turf sales & marketing for Region 2 (Europe, CIS, North Africa and Near & Middle East).

“Now with 24 automatic functions, 11 in base equipment and five exclusive to John Deere, the S700 Series deserves its new name: the Automated Combine.”