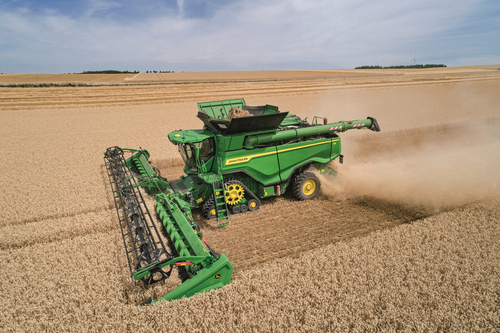 John Deere’s new 6R Series tractors and the company’s largest ever sprayer will be among the fleet of machines on show for the first time at Cereals this June.

The company announced the addition of four new models to its hugely popular 6R range last November, including the four-cylinder 6R 150 – aimed particularly at mixed farms – and the six-cylinder 6R 185, which is a specialist transport tractor for farmers and contractors who spend more time on the road.

Cereals will be the first time many farmers have seen the new models up close, and it will be the debut UK outing for the new R975i sprayer.

It is the biggest trailed model the company has ever produced, with boom widths of 24-40m and a 7,500-litre capacity that tops the R900i Series line-up. The R975i brings higher accuracy, reduced chemical use and more comfort when filling and operating the sprayer.

Over the two days, John Deere will be taking part in the Sprays and Sprayers Arena, demonstrating both the new R975i and the smaller R740i, as well as the latest model year Mazzotti MAF self-propelled sprayer. Mazzotti was bought by John Deere in 2017 but remains a fully owned subsidiary and retains its iconic branding.

Another major technological breakthrough farmers can learn about at the show is the new eAutoPowr option available on the John Deere 8R 410. It is the world's first electric infinitely variable transmission with electro-mechanical power split.

John Deere has completely replaced the hydraulic components with an electric power path. Two brushless electric motors are virtually wear-free and powertrain durability exceeds any other concepts previously offered in the industry. Moreover, this simplifies the design of the transmission and allows real time remote technical diagnosis.

This significant step in John Deere’s journey towards electrification has been developed in partnership with Joskin.

John Deere will be taking part in the direct drilling demonstrations at Cereals 2022 with farmers able to cast their eyes over the 750A All-Till drill.

Available in 3, 4 and 6m widths, the 750A is a versatile tool. It’s designed with large clearances for no-till drilling into stubble, working after minimum or conventional cultivations, and single pass operation for grassland and rough pasture renovation.

Fitted with the Accord air seeding system, operators will need a minimum of 80 to 140hp and can expect to cover 6ha/hr, depending on conditions, at seeding depths from 13 to 90mm. Seed is applied at a rate of 2 to 380kg/ha via a central 1800-litre hopper and single metering system on the 3 and 4m units, or a 2300-litre hopper and twin metering units on the 6m model, which folds down to 3m for transport.

Arable farmers looking to achieve the next level in harvesting performance can take a look around the flagship X9 combine, which will be on the stand for the show

These machines help large-scale farmers harvest more tonnes per hour and more hectares per day, even in tough conditions.

Tactical Marketing Manager at John Deere UK, Chris Wiltshire, said: “We have lined up a great range of static and moving demonstrations for arable farmers to explore our range of tractors, sprayers, combines, drills, and technical innovations.

“The future of efficient, profitable agricultural production is going to be heavily dependent on boundary-pushing technological advances and this year’s John Deere Cereals stand is packed full of examples of fantastic machinery that can make a big difference to farm businesses.”