Driving a Deere for dementia 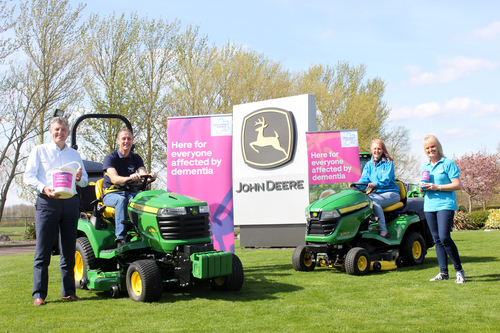 Andy and his daughter Kathryn, who is a hairdresser at Leckonby Hair Studio in Great Eccleston, are planning to drive non-stop to break the record, which stands at four days and 23 hours. They will be using a standard 24hp X950R lawn tractor (less the rear collection system and mower deck) and support vehicles provided by John Deere. The X950R has cruise control and a top road speed of 10mph, and will also be equipped with a GPS tracker to qualify for the record.

The ‘Driving the Distance for Dementia’ Challenge is due to set off from John O’Groats at 10am on Tuesday 25th July 2017; the traditional distance by road to Land’s End is 874 miles. The planned route goes past the family home in Inskip, where Andy Maxfield spends much of his spare time cutting the grass in public open spaces around the village.

Andy and Kathryn will also be supported by Andy’s wife Karen, who is a Deafway support worker in Preston, and their other daughter Kaitlyn, a college student who will be blogging and taking videos and photographs of the challenge along the route.

There is a family history of Alzheimer’s, as it affects Andy’s 77 year old father James and James’ mother Theresa was also diagnosed with the condition. “I started thinking about fundraising ideas towards the end of last year, when my dad was going downhill quite quickly,” says Andy Maxfield. “It was my birthday in January, so I asked people to make donations to charity instead of giving me presents, and it’s gone on from there.

“I then had the idea of a fundraising ball to raise money for Alzheimer’s Society, which will be held on Saturday December 9th at Preston Masonic Hall. Alongside that, because friends and neighbours in the village often take the mickey out of me for being into lawnmowers – I’ve got eight altogether – I just thought it would be appropriate to choose a lawn tractor for the record breaking attempt.

“I asked John Deere, although I don’t have one of their mowers at home, as I know they make quality products and I wanted something to get me from A to B without breaking down!”

John Deere Limited turf division manager Chris Meacock adds: “Our UK and Ireland employees select a specific charity each year to support with a variety of fundraising activities. By coincidence we had chosen Alzheimer’s Society when we were approached by Andy Maxfield to help with the Guinness World Record attempt, so it was very good timing on his part!

“We are delighted to back this very worthy cause and are looking forward to the challenge. In addition to providing the X950R for ‘Driving the Distance for Dementia’, we have offered Andy a new X350R lawn tractor worth over £5000 as a special raffle prize for the family’s charity ball in December.”

Sue Swire, regional community fundraising officer for Alzheimer’s Society in Lancashire, says: “We are so grateful to Andrew and his daughter Kathryn, who are taking on such a great challenge to raise money for Alzheimer’s Society to unite against dementia. Dementia devastates lives, but dementia won’t win. Funds raised from the challenge will help us move a step closer to a world without dementia.”

Alzheimer’s Society is available for anyone affected by dementia and there are lots of ways the charity can help. Call the National Dementia Helpline on 0300 222 1122 or visit www.alzheimers.org.uk

The charity ball has a JustGiving website page for donations at www.justgiving.com/andrew-maxfield, text MAXF80 £3 to 70070 or visit www.facebook.com/ForgetMeNotPreston.