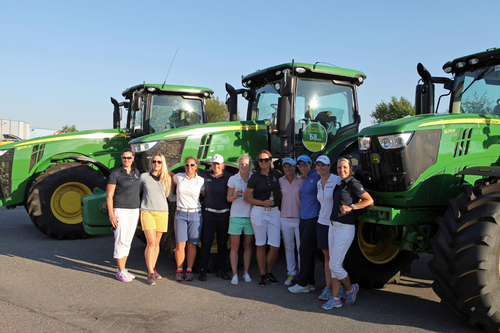 European Solheim Cup team captain Carin Koch has seen first-hand that her team has the power for this year’s tournament after leading them on a specially arranged John Deere ride & drive event.

John Deere, the official machinery supplier to The Solheim Cup 2015, is a world leading manufacturer of agricultural, construction & forestry equipment and turf care products, including both professional golf course maintenance and domestic garden machinery. Carin and members of the team put the latest generation of agricultural tractors and Gator utility vehicles through their paces at the company’s test track facility in Bruchsal, Germany.

“We had a lot of fun! These are totally different to the vehicles we would normally use. We appreciated the opportunity and were impressed by how easy it was to drive the various machines,” said Carin Koch.

The 10 team members – who are more used to seeing and operating equipment on golf courses such as John Deere Gators and players’ golf buggies – clearly enjoyed their first experience of driving powerful agricultural tractors ranging from 215 to 370hp, and several shared the occasion on social media channels.

The Solheim Cup combines the tradition and prestige of the game of golf with passion for one’s country. This biennial, transatlantic team matchplay competition for women features the best European golfers from the Ladies European Tour (LET) and the best US-born players from the Ladies Professional Golf Association (LPGA).

The Solheim Cup is named in honor of Karsten Solheim, the founder of Karsten Manufacturing Corporation, which makes PING golf equipment. In 1990 the Solheim family, in conjunction with the LPGA and the LET, developed the concept and became the title sponsor.

Held every two years, the event has grown into the most prestigious international women’s professional golf team event, with the most highly coveted trophy. Some of the most memorable moments in the sport have happened during Solheim Cups, and berths on the European and US teams are highly sought after by players from both organisations.

The 2015 Solheim Cup will take place on September 18-20 at St Leon-Rot Golf Club in Germany. The European team enters the competition holding the Cup and will need 14 points to retain it, with the US team needing 14½ points to regain the coveted Waterford Crystal trophy. The US squad holds an overall 8-5 lead in the series, which began in 1990, and is undefeated (6-0) on American soil.

For more information about The Solheim Cup and updated standings for each team, log on to www.solheimcup.com and www.solheimcupeurope.com.