Farming on parade as combine stars in Lord Mayor’s Show

7th November 2014
This article is more than 1 year old 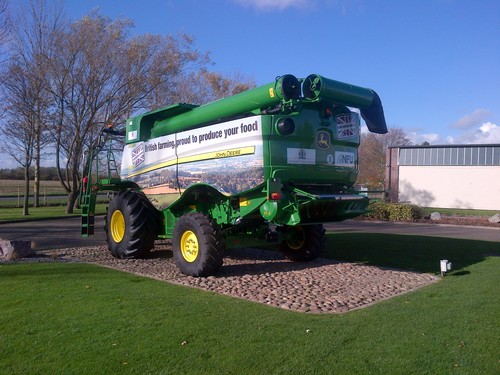 A state of the art combine harvester is taking to the streets of central London for one of the UK’s most historic parades.

John Deere has teamed up with The Worshipful Company of Farmers and the NFU for this year’s Lord Mayor’s Show (Saturday November 8) in a campaign to encourage the public to back British farming. A John Deere S685i combine, specially decorated with vinyl graphics depicting the great British countryside, is being used to demonstrate how our food is produced. The John Deere combine will be driven from Mansion House to St Paul’s Cathedral and on to the Strand before a return leg along the Embankment and Queen Victoria Street and back to Mansion House. The combine’s 6m (20ft) 620R header will be towed by a 1946 John Deere Model D tractor.

Eight young farmers representing the NFU’s seven English regions and Wales will accompany the combine to promote farming and agriculture as a modern and vibrant industry that provides a wide range of career opportunities such as agronomists, scientists, vets and engineers.

This year is the 687th Lord Mayor’s Show and is expected to attract crowds of more than half a million people on the day, lining the pavements on the three mile long procession through the City of London, as well as millions more watching the live broadcast on BBC 1.

John Deere Marketing Manager Chris Wiltshire said: “John Deere is proud to support British farming and to demonstrate that support with our combine in the Lord Mayor’s Show.  It’s not often we get the chance to show a machine of this size in a town or city, and taking part in this parade in the centre of London is very special.”

NFU Vice President Guy Smith added: “We are very honoured and excited to take part in one of London’s biggest and most prestigious events. Being involved with the Lord Mayor’s Show is a wonderful opportunity to showcase farming to a wide audience, many who won’t have seen a combine harvester up close before. The combine will look stunning and will be specially branded to promote our ‘Back British Farming’ messages and to let the public know that farmers are proud to produce their food.”

Nick Padwick from the Worshipful Company of Farmers commented: “This year’s Lord Mayor’s Show is going to be a great opportunity for us to showcase young people, as we have had the privilege to engage with eight young farmers coming into the industry.  This will hopefully show the public that farming has many related industries, so if someone watching sees a young girl or boy who is training to be a dairy specialist, a vet, somebody in education or going down the road of a machinery engineer, this will demonstrate that farming is not just about growing crops.  John Deere this year has also been very kind to lend us one of their largest combines, which will give the general public a view of how food is produced before it gets to their plates.”