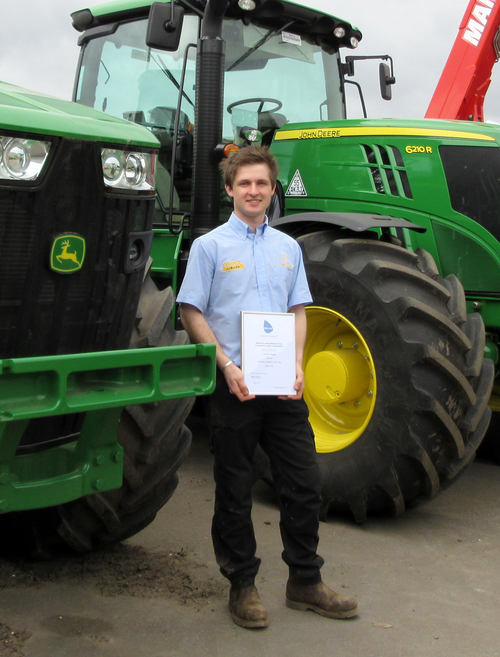 Three apprentices from John Deere’s Ag Tech and Parts Tech training programmes – two from the Midlands and one from Kent – have won awards in Babcock’s annual Automotive Apprentice of the Year competition, designed to identify the best and brightest apprentices in industry.

A total of 24 apprentices from across the UK competed at the Technical Training Academy in Milton Keynes in five specialist categories, for Service Technician, Parts Advisor, Panel Technician, Paint Technician and MET (Mechanical Electrical and Trim) Technician Apprentice of the Year. In addition to John Deere, some of the UK’s leading vehicle manufacturers and fleet providers were represented including Audi, BMW, Fiat, Mazda, SEAT, Skoda, Royal Mail Group and Volkswagen Paint and Body.

Various service or parts and customer related tasks were set up to test the skills, methodology and processes of all the candidates within set time frames. While each apprentice was assessed on their own specialism, they were truly tested by working with vehicles that were not from their own brand – which meant the non-John Deere apprentice service technicians were faced with a tractor in one of their seven tasks.

The winners of each specialism received a framed certificate and Samsung tablet, while the overall winner of the Babcock Automotive Apprentice of the Year Award for 2015, Matt Savage from the VWG Paint and Body network, also received a trophy and a year’s membership to the IMI (Institute of the Motor Industry, the industry’s awarding body for national apprenticeship programmes). The awards were presented by IMI business development manager Michelle Barrett and Babcock’s office manager and event organiser Kirsty Grant.

Babcock operations manager for automotive Mike Hamilton said: “We are immensely proud of all our competitors. To even be nominated to take part from over 1000 apprentices that are currently completing Babcock Automotive Apprenticeship training is an achievement. Our winners are those that have really stood out from the crowd and shown their capability to perform under pressure.”

John Deere’s training centre manager Richard Halsall added: “Many congratulations to all three John Deere apprentices and their dealers on these awards, which are thoroughly deserved. We pride ourselves on the quality of the training provided to all John Deere apprentices on the Ag, Parts, Turf and Customer Service Tech programmes, so it is always encouraging to receive this kind of recognition for everyone’s efforts.”

Babcock has been delivering John Deere’s apprentice training since autumn 2010. The Ag Tech service technician programme started in 1992 and was the first such scheme to be introduced in the UK. It won a National Training Award at the end of 1997, the only one ever made to an agricultural machinery apprenticeship programme.