John Deere expands its use of CESAR on the Gator range 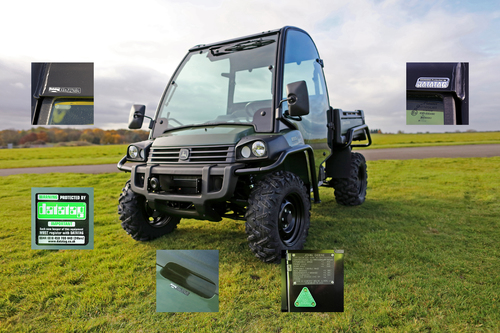 Mud soaked trails, impossibly steep inclines, freezing cold starts, John Deere Gators have proved themselves year after year as go-anywhere, dependable and reliable work vehicles. With more than 500,000 built, they’ve earned a reputation for durability and quality like no other.

Unfortunately, their positive attributes have made Gators a popular target for professional and opportunistic thieves. Reacting to this, and following the success of CESAR in reducing tractor theft from John Deere customers and dealers, John Deere has announced that from the 1st November 2016, all XUV & HPX Gator utility vehicle models sold in the UK & Ireland will be factory fitted with the CESAR security marking and registration scheme.

According to the Metropolitan Police’s PANIU team around 200 utility vehicles are stolen each year in the UK, with approximately half being John Deere Gators. Many machines are stolen to order and shipped abroad within hours of being taken.

The official CESAR Scheme, which is widely supported by trade bodies including the Agricultural Engineers Association (AEA), uses a range of security marking technology supplied by Datatag ID, including tamper evident plates with a unique registration number for each piece of equipment, RFID tags, forensic DNA and Datadots to give each machine a unique fingerprint that thieves cannot remove.

Datatag ID managing director Kevin Howells, commenting on John Deere’s announcement, said: “I’m delighted that John Deere has decided to expand its support of CESAR and introduce it as a standard fit for its Gator range. I’ve every confidence that this move will be as successful for Gators as it has been for John Deere tractors in reducing theft.”

During the LAMMA 2015 exhibition, John Deere Limited’s marketing manager Chris Wiltshire proudly unveiled an XUV 855D model as the 200,000th machine to be fitted with the CESAR system. Nearly two years later, the 225,000th CESAR plate was fitted to BBC Countryfile presenter Adam Henson’s combine harvester at his home in the Cotswolds.

Chris Wiltshire added: “As leaders in the tractor and utility vehicle markets, we have an ongoing responsibility to address the concerns of our customers over the security of their machinery. The CESAR system is a proven method of protecting against theft, successfully recovering stolen equipment and reducing insurance premiums. With this announcement, we are very happy to demonstrate our continued support of the system by fitting CESAR as standard from now on to our best-selling Gator UTV range.”

CESAR is widely recognised to have contributed to an overall drop in equipment theft of over 60 per cent since its introduction in 2007. Many leading insurers offer discounts for all CESAR marked equipment, including NFU Mutual who offer up to 12.5 per cent insurance discounts.

At LAMMA 2017 the latest CESAR marked Gators will be showcased on the John Deere stand. Datatag will also be exhibiting at LAMMA, which will take place on January 18 & 19 at the East of England Showground in Peterborough.