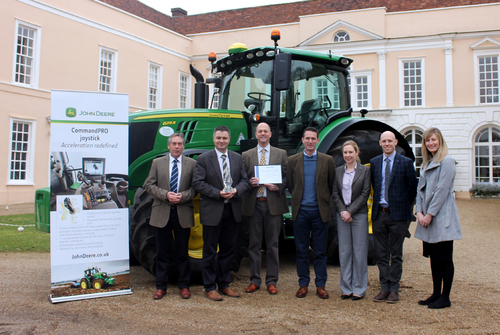 John Deere’s new CommandPRO joystick has won the Farmers Guide Award for Excellence for 2016, the second year that these awards have been presented for innovations in the machinery and arable sectors.

The awards were set up in memory of Doug Potts, who founded the original East Anglian Farmers Guide magazine in 1979. They are intended to highlight excellence within the industry, as selected by Farmers Guide machinery editor David Williams and arable editor Dominic Kilburn.

The all-new CommandPRO joystick option was announced in autumn 2016 at the launch of the new 6230R and 6250R tractors, and introduces a new dimension in ergonomics and versatility to the John Deere range. Top speed can be reached with just one push, and 11 programmable buttons are available for the hitch, pto, SCVs, AutoTrac steering controls etc.

The functionality of CommandPRO allows the tractor to be controlled from top speed to zero with a simple push or pull of the joystick, and lower speeds from 0 to 2kph can be achieved with the creeper control function. Both the joystick and conventional tractor pedals can be operated at the same time, and there is no need for an external ISOBUS joystick as the driver can also operate the tractor and ISOBUS functions simultaneously.

Speaking at the award presentations, David Williams said: “The Farmers Guide Awards for Excellence are our way of identifying and celebrating the best innovations of the year, and rewarding the work that goes into them and the people responsible.

“John Deere’s CommandPRO joystick is an important development for the company, and is going to be used all year round by demanding farmers and contractors. There are some very interesting new functions on this joystick that I believe will make a big difference to operators, both in the field and on the road.

“It’s very ergonomic, easy and comfortable to use, and well thought out – all very important considerations when you’re spending all day in the tractor cab for weeks at a time. CommandPRO will be a real benefit to productivity and drivers will like it – which is why we felt it was the most deserving of our 2016 award for machinery innovation.”

Chris Wiltshire added: “We are delighted to receive this award, which is valued recognition of the work done by John Deere product designers and engineers to bring this new product to market. CommandPRO was also the result of a great deal of feedback from a focus group of European contractors, and we believe we now have an option that will prove to be extremely popular on our tractors for many years to come.”