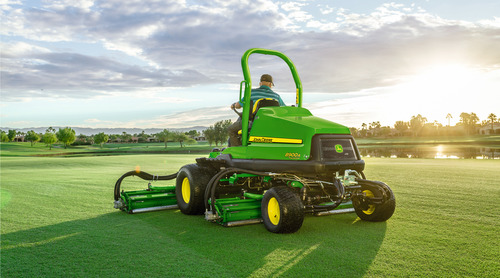 Combining higher capacity mowing with premium cut quality and after-cut appearance, John Deere’s new 8900A PrecisionCut fairway mower is the latest addition to the company’s award-winning A Model family of fairway, rough, trim & surrounds mowers. The mower will make its European debut at BTME 2017 in Harrogate in January.

With the new 8900A, which is the widest John Deere PrecisionCut fairway mower yet, users can now maximise both productivity and cut quality while having more control over how the machine performs.

The mower offers a choice of 26 or 30in (66 or 76cm) wide cutting units, both 7in (18cm) in diameter, which provide an overall cutting width of 114 or 130in (2.9m or 3.3m) together with exceptional contour following. Both units offer an optional verticutter attachment for increased versatility and convenience.

The 26in (66cm) cutting units are available in five, eight or 10 blade versions, with optional fairway tender conditioners and rear roller power brushes to further enhance cutting performance. The larger 30in (76cm) cutting units have five or eight blades and allow higher capacity mowing. Precision adjustment of both these units is a simple task thanks to the ingenious SpeedLink system, which is proven on John Deere’s existing fairway mower range.

The 8900A’s operator CommandARM also incorporates the proven TechControl system, which allows simple but effective management for features such as operating controls, maintenance and diagnostics. Using different screens on the password controlled TechControl display, users can electronically set the mowing and transport speeds simply and quickly by pressing a button.

In addition, turning speed can be slowed down to a set percentage of the mowing speed when the cutting units are lifted after a pass, which greatly reduces scuffing.