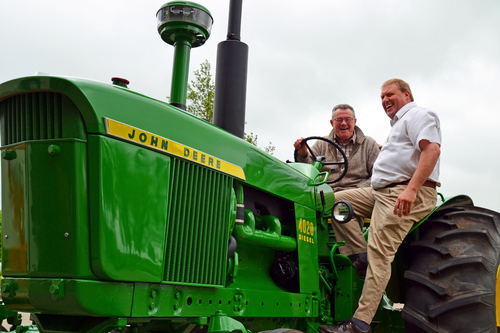 A 78-year old Staffordshire man achieved one of his life’s ambitions when he took two John Deere tractors, spanning 50 years of production, for a spin at the company’s UK headquarters in Langar, Nottingham last month.

“I’ve driven most things in my time but never a tractor of any description, and it has always been my dream to drive a John Deere,” says Tony Hales. Tony is a retired production director from Newcastle-under-Lyme who spent 50 years working in the ceramics industry in Stoke-on-Trent, and he has been married to his wife Ann for 54 years.

“I only ever wanted to be a farmer from when I was a small boy. I spent much of my childhood riding around with the son of a neighbour who owned three cattle lorries, visiting cattle marts and even abattoirs.

“My father spent a lifetime at Wedgwood, and I never wanted to follow in his footsteps. However, when I was old enough to start work he said that farm labouring wouldn’t pay and I had to get a proper job, so I became a copper plate engraver by trade and ended up working for Spode and then Chatsworth Bathrooms for the next five decades.”

Tony and his grandson James Ackerley, who thought of the idea, were invited to visit Langar by the company’s product marketing manager Mark James, who collects and restores vintage and classic John Deere tractors in his spare time. Mark arranged for Tony to drive a modern 6175R tractor and the UK branch’s pride and joy, a specially restored 4020 model (nicknamed BEV after its number plate) dating from 1966, when John Deere Limited first started trading from the same premises.

Mark was initially contacted by Tony’s daughter Elizabeth Ackerley, who wrote: “My story is that my father has always had one wish and it is to drive an old fashioned John Deere tractor. I would love to make this dream come true for my dad. He has recently been diagnosed with stomach cancer and he is due to start some chemotherapy soon, but he still desperately wants to come.”

“I’ve always wanted to drive a John Deere tractor, nothing else would do, although there were very few if any around in my youth – they were all Fordson Majors and Little Grey Fergies,” says Tony. “We’ve always talked about John Deeres in the family, and my grandson James bought me a scale Model L vintage tractor a few years ago as a present. For some reason I’ve always been attracted by the colour scheme – they mustn’t ever change it!

“Driving the two tractors, it makes you realise just how things have moved on over the last 50 years. For comfort I preferred the modern tractor, obviously, but I should need six months to learn how to use all the electronics! It was also very noticeable how hard it was to change gear in the older model, but I really enjoyed driving them both, it was an absolute pleasure and definitely worth coming.

“For a world-renowned company like John Deere to respond like this to my daughter’s request and be so helpful, it was really appreciated by the whole family. That’s a life’s ambition fulfilled, so I’m very happy.”

The family has been invited back to Langar to take part in John Deere Limited’s 50th anniversary celebrations, which take place on the weekend of 24th & 25th September 2016. One hundred years of John Deere tractors will be represented at this special outdoor field show, which will also feature working demonstrations and displays, entertainment and activities for all the family. To register for this free event, visit the website at www.JohnDeere.co.uk/50years