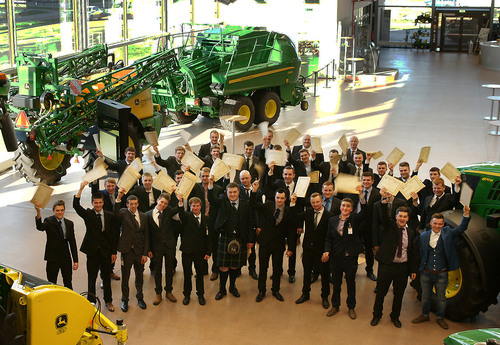 John Deere has also been listed for the first time as one of the best 100 employers for school leavers in the UK, the only agricultural and turf machinery company to be so recognised (for the full list, click here: www.allaboutschoolleavers.co.uk/employer-rankings).

Three of the company’s apprentices won overall awards for the 2016 graduation year. Jack Robbens of dealer Ben Burgess, Norwich was named Ag Tech Apprentice of the Year, for which he received a crystal plaque, a certificate and vouchers for workshop tools worth £250.

Now in its 25th year, Ag Tech was the first such scheme to be introduced in the UK and won a National Training Award at the end of 1997, the only one ever made to an agricultural machinery apprenticeship programme. Since the first programme started in 1992, nearly 700 apprentices have graduated through the three main John Deere schemes (Ag Tech, Parts Tech and Turf Tech) and are now working in the company’s nationwide dealer network.

The John Deere and ProVQ schemes were recently included in the 2017 School Leaver Awards, in recognition of the programme’s quality and the opportunities it presents to young people working productively in the agricultural and turf sectors.

“We beat some very strong competition from other household names, coming first for an engineering and manufacturing company and third overall in the ‘Best Intermediate Apprenticeship Programme’ category,” says ProVQ managing director Julian Lloyd. “To be recognised as one of the country’s top 100 employers for school leavers, as judged by the apprentices themselves, makes us all very proud of the achievement.”