Mowers on parade at Chelsea 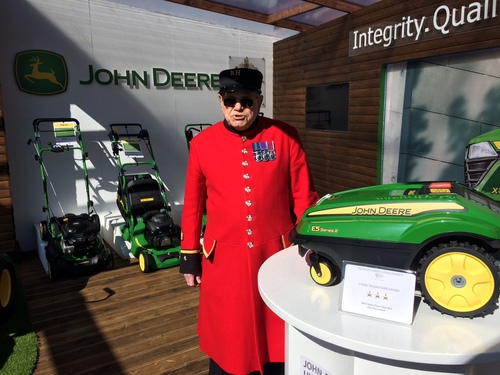 The old and the new came together on the John Deere stand at the RHS Chelsea Flower Show in London last month, when a Chelsea Pensioner stopped to inspect a parade of the latest lawn tractors and mowers.

The show is held every May in the grounds of Chelsea’s Royal Hospital, home to 300 former soldiers in the British Army. In their distinctive scarlet coats, the veterans take great delight in the annual invasion by the horticultural community.

Chelsea Pensioners are among 157,000 visitors attending the five day show.  Her Majesty The Queen and members of the Royal Family enjoyed their traditional preview visit before the show opened and this year saw many displays in honour of the Queen’s 90th birthday.

For the second year running the John Deere stand, designed by Henson Franklyn, received a Three Star Trade Stand Award from the show’s organisers, the Royal Horticultural Society. As well as an impressive display of machinery, the stand also celebrated the 50th anniversary of John Deere Limited in the UK and Ireland, which opened for business at Langar, Nottingham in 1966.

The Royal Warrant was first awarded to John Deere Limited in 1970, for the supply of agricultural equipment to Her Majesty The Queen. Royal Warrants are a mark of recognition to people or companies who have regularly supplied goods or services for at least five years to certain members of the Royal Family.

They have always been regarded as a mark of excellence and the highest standards of service and quality, and John Deere Limited is very proud to have held its Royal Warrant for all but the first four years of the company’s existence in the UK and Ireland.

John Deere was granted an extension to its Royal Warrant in 2006, which now uniquely covers the supply of agricultural, groundscare & horticultural products to The Queen's Household.