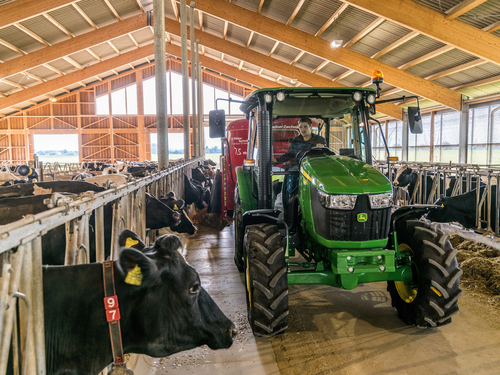 John Deere has announced a number of improvements to its lower horsepower 5M and 5E Series tractors up to 115hp, which are suitable for arable, livestock and mixed farms as well as specialist growers. The company has also extended the 5E range with the introduction of the new 49hp 5050E, John Deere’s smallest agricultural tractor. Models from both ranges will be featured on the John Deere stand (G19) at LAMMA ’18.

John Deere’s 5M Series is Europe’s bestselling tractor range. Following the success of its predecessors, the new model line-up for 2018 has been designed to further increase operator comfort and overall performance, while remaining versatile and easy to use.

To meet current emission standards these use the same common rail technology featured in John Deere’s larger tractors, combined with the company’s well established diesel-only design. There is a choice of 16/16 PowrReverser or 32/16 PowrReverser Plus transmissions on all four models, plus 94-litre/min open centre hydraulics and three pto system options.

The 5M Series offers a choice of open station, standard or premium cab with sunroof, as well as a narrow cab option. The cab has been updated to include an air suspended driver’s seat, more storage compartments, improved interior finishing, a new digital display and a redesigned gear lever with a new declutch function.

In addition, the rear hitch capacity has been increased to 4.32 tonnes and payload to 7.5 tonnes. The new 5M Series tractors can be equipped with John Deere’s latest 543R and 603R front loaders, with a ‘loader ready’ option allowing the necessary components to be fitted ex-factory.

There is a choice of two transmission options, a basic 12/12 PowrReverser and a new 24/12 PowrReverser unit with a top speed of 40kph. The standard 540rpm pto operates at a rated engine speed of 2100rpm, while the 540E economy version runs at 1600 engine rpm.

Cab comfort has been significantly increased, with the option of a new air suspension seat and a new right hand control console which, together with the standard EQRL (electric quick raise & lowering) hitch system, simplifies implement operations. A new digital instrument panel provides better monitoring of the main tractor functions, and other features include electro-hydraulic activation of the pto and hand throttle.