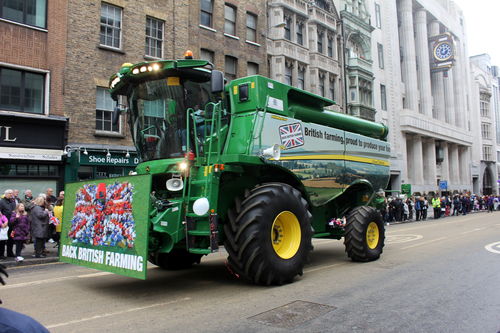 John Deere’s new 6R and 6M Series tractors, R4040i self-propelled sprayer and 8000 Series self-propelled forage harvester will be featured for the first time on the John Deere stand at LAMMA 2015. The tractors will be making their UK farming show debut, following their European launch this autumn.

In addition, the specially decorated John Deere S685i combine harvester that had a starring role in the 2014 Lord Mayor’s Show in London this November, in support of the NFU’s Back British Farming campaign, will be featured at the entrance to the event.

These latest John Deere machines have been designed to improve machine performance, uptime and operating costs for both arable and livestock farmers, as well as contractors.

Fuel efficiency of this new model can be enhanced by choosing either the established AutoPowr continuously variable transmission or the new, advanced double-clutch DirectDrive transmission. The new CommandARM – as featured on John Deere’s latest 7R and 8R Series tractors – features an electronic joystick and a Generation 4 CommandCenter display. In addition, this FarmSight-ready 6R Series tractor can be fitted with JDLink telematics as an option, to include remote display access (RDA) and wireless data transfer (WDT).

The small frame 6105M is a new lower horsepower addition to the 6M Series standard tractor range from 115 to 170hp. This model has been designed as an entry level livestock tractor, with extra premium features compared to the 5M Series.

The 4000-litre R4040i self-propelled sprayer is also powered by a new 6.8-litre Stage IV compliant PowerTech engine, producing 235 rated hp boosted to 255hp with IPM. The sprayer comes AutoTrac ready and with a free JDLink Ultimate subscription for one year, which enables a range of additional FarmSight precision farming solutions including RDA and WDT, as well as Service Advisor Remote.

John Deere is currently the only forager manufacturer with a proven, accurate, commercially available system for measuring both grass and maize constituents in real time. Mounted on the forager spout, the versatile HarvestLab system can be removed easily for stationary feed analysis of different forage ingredients and for clamp silage analysis in the winter.

These new products will be shown at LAMMA alongside a range of other John Deere agricultural equipment, Gator utility vehicles and FarmSight precision farming systems.