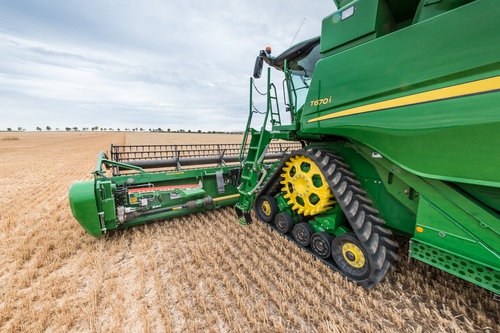 John Deere is expanding its range of innovative, advanced technology combine harvesters for 2019. In addition to the all-new W330 and W440 compact machines, the W- and T-Series are being updated with higher performance features, and completely new tracks are being introduced, with numerous options and benefits.

The next generation of John Deere track systems sets a new standard in the combine industry, offering 20 per cent more comfort, a 30 per cent larger footprint and 50 per cent more uptime. Manufactured by Soucy, the new rubber tracks are available for all S-Series combines plus the T560, T660 and T670 models.

On average the footprint is now 30 per cent larger compared to existing systems on the market. Due to a significantly longer track belt design, the 24in (609mm) track option for the S700 and T-Series combines has the same footprint as competitive 30in (762mm) versions, while transport width remains below 3.5m and is only 3.29m on the five-walker T-Series model:

Top speed is up to 40kph on all models, while ride comfort has been improved by an undercarriage with five pivot points. Measurements taken at the axles and the cab floor have confirmed a 20 per cent more comfortable ride compared to a competitive make.

Increased uptime is achieved by using four instead of three steel cord layers on the new tracks, while the track profile has also been improved, with the lugs now deeper and angled at 55 degrees. In addition, track durability has been road tested using a front-mounted eight-row maize header. With the combine running at a test speed of 40kph for seven hours a day over 20 days, the result was 50 per cent more durability than the previous design.

The tracks can be replaced by wheels if required for field work or to enable easier resale of the combine. Another feature is the triangular design with positive drive – in tough conditions the tracks lift up at the front and pull themselves out of the soil instead of digging deeper into it. Maintenance of the tracks is also very easy, as there are no greasing points and the transmission oil only needs replacing every 500 hours.

The new Interactive Combine Adjustment (ICA2) system makes it easier for S700 Series operators to consistently achieve maximum performance from the combine. After optimising machine settings such as grain quality, losses and cleanliness of the sample, ICA2 maintains the pre-selected levels while harvesting conditions are changing.

In order to make the initial combine optimisation even easier than before, John Deere is introducing the all new MyOperationsCentre app, which enables farmers and contractors to view and change combine settings remotely from their mobile phone, tablet or PC. The operator can then confirm the adjustments on the in-cab display.

This new app is now available to all S700 Series combine owners free of charge at the App Store. After downloading the app, customers will need to register at www.MyJohnDeere.com to activate the link to their combine.

John Deere’s W- and T-Series machines are well known for their performance in the straw walker combine sector. With new and easy-to-replace sections in front of the threshing concave, operators are now able to adjust to changing harvesting conditions and increase overall performance.

All T-Series models are now equipped with a new separator grate. The rear cast iron fingers have been replaced by new patented steel separation segments to increase output. Alongside this feature, the distance between the rear beater drum and the grate below has been reduced, which allows more aggressive separation. Independent institutes have measured a productivity increase of up to 10 per cent with the new separator grate.

Operators will also benefit from a new 360 degree LED light option, which provides a better view when working during the night and in low visibility conditions. In addition, maintenance of the W- and T-Series combines has been improved by using a central oil drain bank to allow the oil to be changed with reduced losses and less pollution.

Designed for smaller and medium sized farms, the second generation W330 and W440 combines are now available. For increased operator comfort, overall cab volume has been increased by 15 per cent to 3.3m3 and now offers a similar working environment to that of John Deere’s larger combine models.

The new 8:3 touchscreen display is intuitive to use and is unique in this industry segment. In addition, automatic combine adjustment (ACA) lets the operator select the next crop to be harvested, and the combine then automatically adjusts the drum and cleaning system by varying the drum and fan speeds, concave clearance etc.

To speed up emptying of the grain tank, the unloading rate has been increased from 55 to 75 litres/sec on the W330 PTC (pre-threshing cylinder) model. On the W440 the rate has been increased from 55 to 100 litres/sec by implementing the unloading system from the W440 PTC. The W330 PTC  combine will also feature a new lateral tilt option for the feederhouse, which allows the header to follow ground contours in all directions.

New draper header for all crops

Following the increasing demand for draper headers in Europe, John Deere – as the world’s leading manufacturer in this sector – is now offering the 700FD Series Flex Draper header. New seals reduce rapeseed losses by up to 45 per cent, and uptime has also been improved by introducing corrugated edges on both sides of the belt, which delivers better belt alignment and guidance.

The optional top auger above the belt has an increased diameter of 45cm and the central feed drum now offers a second upper position for improved crop flow in oilseed rape. To cope with uneven ground, the flexible knife can move up or down by 19cm across the full width of the cutterbar. This greatly improves harvesting of soya beans, peas or laid crops as the header can cut as close as 38mm to the ground. Up to four header height sensors also improve ground contour following.

Draper belt headers enable rotary combines to perform up to 10 per cent better than machines equipped with standard rigid auger headers, due to more even feeding of the crop head first into the combine. Moreover, draper headers are lighter in weight and therefore reduce overall ground pressure.

The new 700FD Series Flex Draper header now offers the possibility of harvesting everything from small grains and rapeseed to specialist crops such as peas and beans with just one header. In addition, the unit’s wide flex range adapts more readily to uneven terrain and makes the harvest more productive, especially in laid crops.