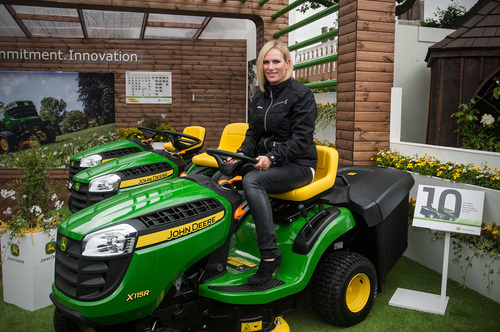 Brand ambassador Zara Phillips MBE was guest of honour on the John Deere stand at the RHS Chelsea Flower Show this week as the company celebrated reaching the manufacturing milestone of 10 million lawn tractors produced worldwide since 1963.

Olympic silver medallist, World and European Eventing champion Zara spent time chatting with John Deere staff before posing for pictures on the X115R lawn tractor, one of three new models launched for 2015 featured on the stand.

The John Deere stand, designed by Henson Franklyn, received its first ever Three Star Trade Stand Award from the RHS on the opening day of the show.

Well known since 1837 as a manufacturer of agricultural equipment, John Deere started its lawn and garden tractor business in 1963 at Horicon, Wisconsin in the US. Since then, the John Deere range has grown steadily and now includes a comprehensive range of walk behind mowers, scarifiers, lawn tractors and the Tango robotic mower.

Zara’s association with John Deere is well-established; she uses John Deere equipment to support her equestrian career, including compact tractors and Gator utility vehicles, and she also features in John Deere advertisements.